11 Reasons You Should Be Obsessed with New Bern 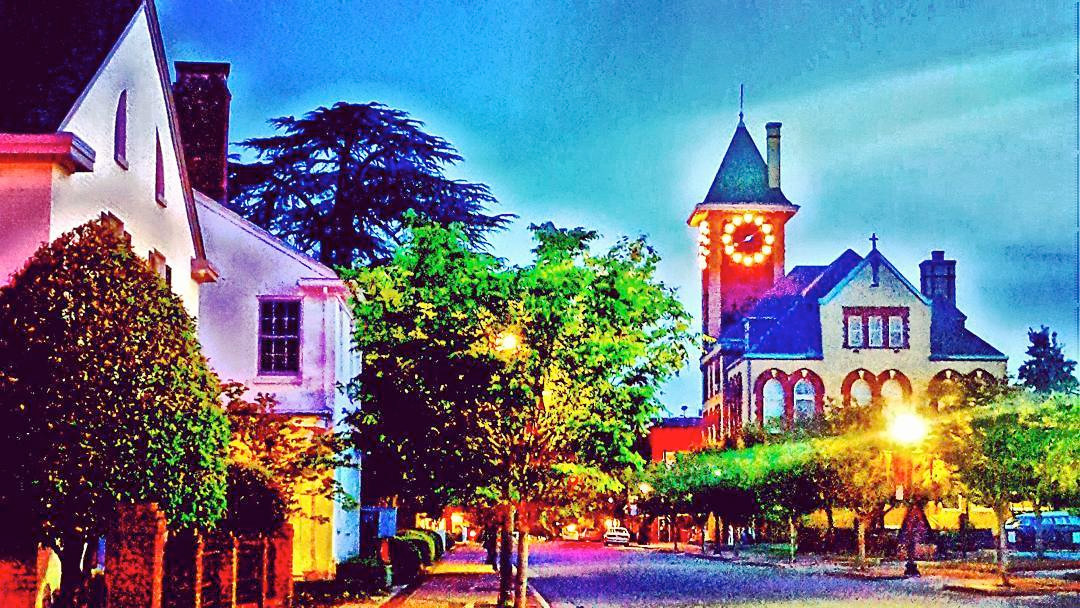 It doesn’t get better than our downtown. It’s engulfed with so much rich history, gorgeous architecture and that southern vibe. You just feel happy while you’re in downtown. Trees line the streets, storefronts are decorated, and everyone is so welcoming. You can shop the unique boutiques, hardware and specialty stores at your own pace. It’s an entirely different world. You’re stepping into a comfort zone for everyone, where each person you come across is smiling. You’ll smell bacon throughout Middle Street coming from Baker’s Kitchen, the aroma of coffee from Bebop’s Cafe or some crab cakes cooking at Pollock Street Pub & Oyster Bar. The houses are magnificent, larger than you can imagine in a downtown area with landscaping as perfect as the Palace. The bells chiming from Christ Episcopal Church will catch your attention as you’re strolling, and you are certain to walk past a pup begging to be petted. Our downtown is something to be treasured, it has come such a long way in the past five years, and we are so proud.

As I mentioned before, you won’t miss the constant smiling in New Bern. It’s because we’re always so happy. No really, we’re almost obnoxiously happy. We say good morning to strangers and befriend everyone we cross paths with. We have the Bengel’s, who own and run Baker’s, Beer Army, and the Trolley Tours. They are all so invested within the community that it’s hard not to love them for all that they do. And if you happen to see a man walking downtown in 100 degree weather with a freshly pressed suit and pair of aviator sunglasses, it’s bound to be our enthusiastic City Manager Mark Stephens. He will be more than happy to stop and chat about everything New Bern. His vision for our city is beyond exciting. Beyond those that work so hard behind the scenes to make our city what it is, is our community that supports them. I have seen everyone come together when one of the above voices call out, and that includes our guests. New Bern makes you want to be involved whether you’re here for a lifetime or only a few days. 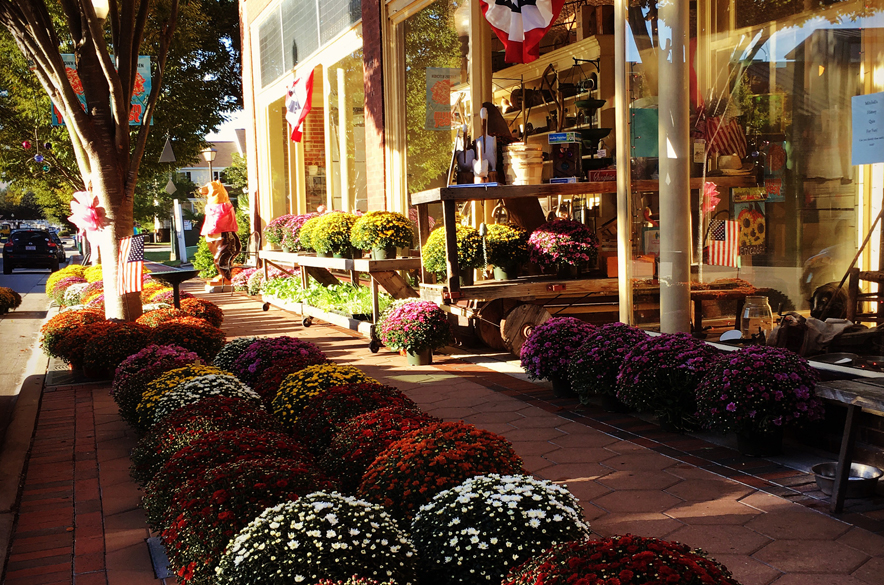 We have two rivers, not just one. And they meet right next to downtown. We’re a little obsessed with our sunrises and sunsets too. Every day they seem to beat the previous showstopping colors. We have a downtown that illuminates in the mornings and evenings for that pick-me-up after a long day. 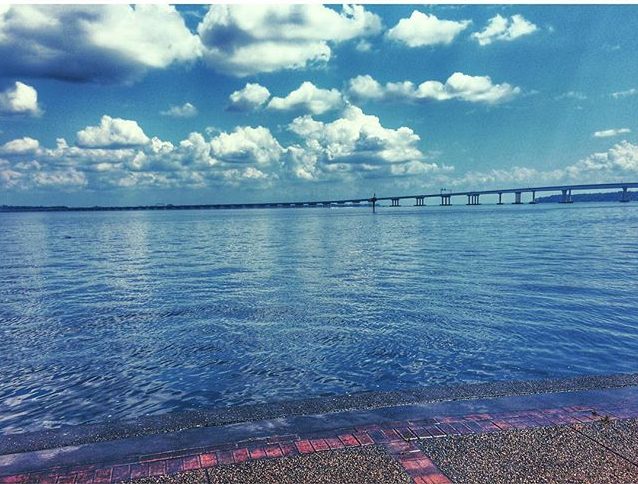 I’ve personally found myself pulling over to take a picture and witnessed dozens of others do the same thing. You can’t miss our Riverwalk which wraps around downtown like a bow on a present. Our City Hall clock tower gives us one half of the height of our skyline downtown. You can’t miss the brightly lit clock face. It holds unique history and has been admired by the masses. The other half is again, Christ Episcopal Church. The Gothic Revival bell tower and spire goes up 150 feet.

Nineteen restaurants located in downtown alone. With that many options, you can find anything you want! Seafood, pasta, steak, salads, sandwiches, we have it all ya’ll. Persimmon’s is known for its spectacular waterfront views,  MJ’s for their strawberry salad, and I could honestly go on and on (here I go). Prohibition has chicken wings that will make you order an extra dozen (as well as one of the best bartenders in town), and if you are anywhere in the vicinity of Tryon Palace, go to Savage’s Pizzeria. Their margherita pizza is indescribable. 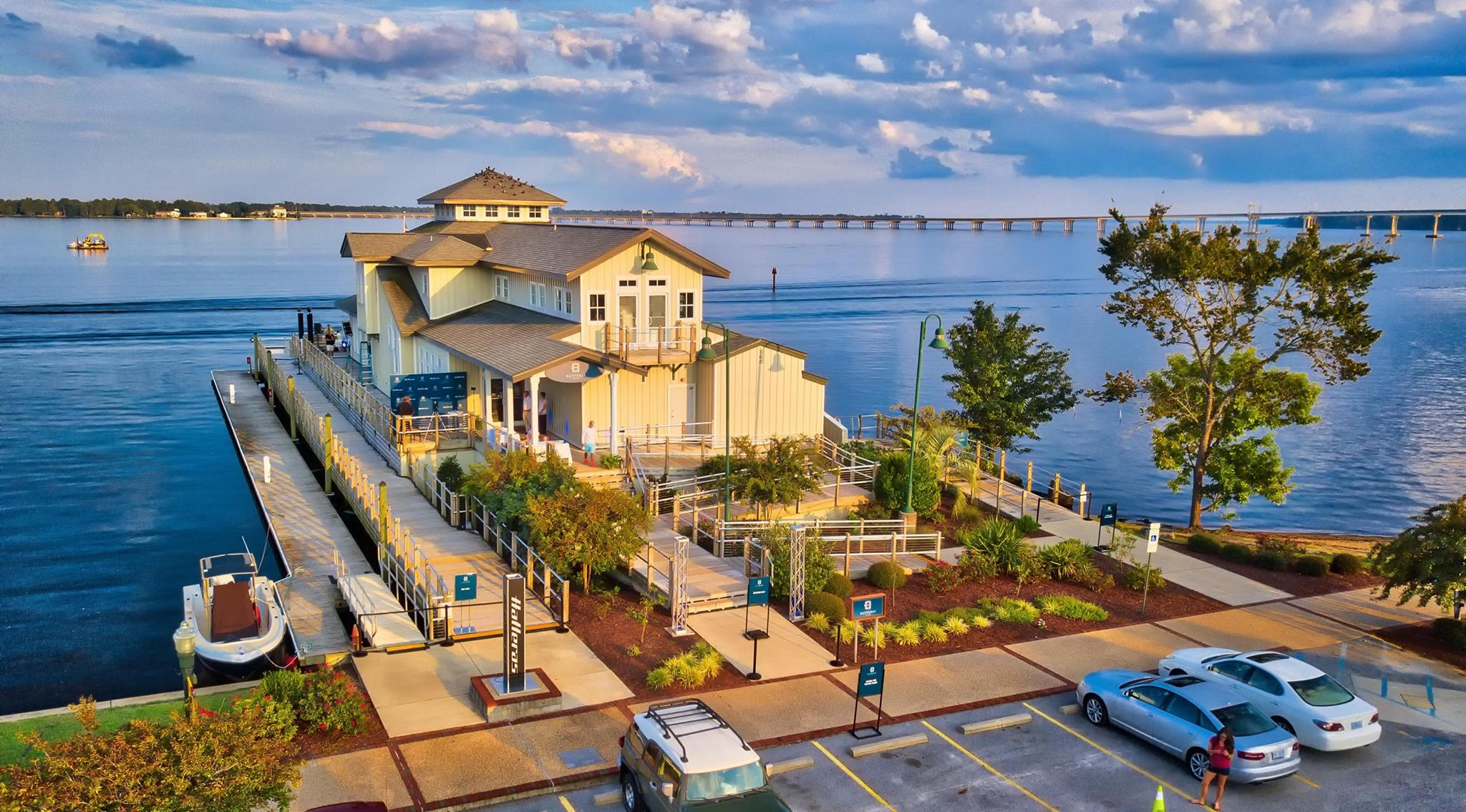 Now to the bars, our nightlife is thriving. We have seven bars in downtown. This ranges from an underground bar covered in copper to a little house tucked away between Middle and Hancock Street. The Harvey Mansion and Brewery 99 are as rare we they come. 99’s owner Pete Frey brews his own beer each week and is a one man shop. The Brown Pelican is also a fun little gem. They have a bar on the opposite side of downtown with live music every weekend and a patio that includes a giant Jenga set. The others are just as great. Bear Town Market even encourages you bring your dog’s inside. And if you’re a lover of craft beer, stop by Beery Army or The Bruin. They will not disappoint. 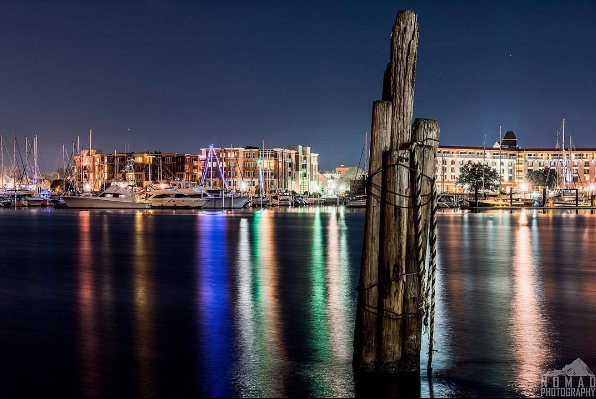 Winterfeast. Home & Garden’s Tour. Bernaroo. Oktoberfest. Candlelight. Beary Merry Christmas. I mean, what?! This doesn’t even touch the surface of what New Bern brings with its events. Not only do we on average have 3-4 bigger events each month, we sprinkle the other days with smaller (and just as fun) ones too. 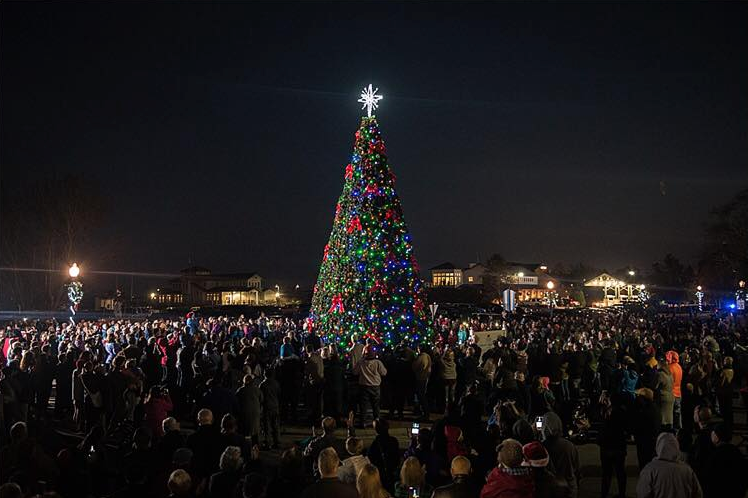 Our annual events bring visitors from all over, including Mumfest, the North Carolina Symphony, Brew Bern, Cherry Point’s Air Show, Ghostwalk and so much more. We like to give you some behind the scenes at the Palace, live music at the wonderful venues around town and the special weekends like the upcoming Outlander Weekend at the Palace (more on that later) as well. If you’re planning a trip here, be rest assured that you’ll positively find something to do. We do it both big and small here. And we do it well.

6. We Aren’t Afraid of Change

A lot of cities are so scared of change, but we embrace it. In the last five years we have transformed tremendously. Our downtown has become the vibrant and beautiful area that everyone flocks to. Our buildings have be refurbished, our hotels remodeled, all while keeping that warm, Southern feel. We have monthly (sometimes weekly) meetings to come together and discuss what we can do to make this area better. Everyone works together and voices their opinion on the best solution. We take acres of land and talk about transforming them into amphitheaters, which would change our dynamic so much, but for the better. We fund projects that we know will change how we do things, but we take that risk because nine out of ten times, it pays off. New Bern knows that in order to grow and thrive, we must get out of our comfort zone. New Bern knows that every idea isn’t a touchdown, but that doesn’t mean we don’t stop trying.

Seventeen+ blocks of history, shopping, eateries, and beauty…all walkable! You’re not going to get burnt out in your shoes walking around downtown. We actually encourage our residents and visitors to park and walk the historic district. The blocks are short and filled with so much to see! 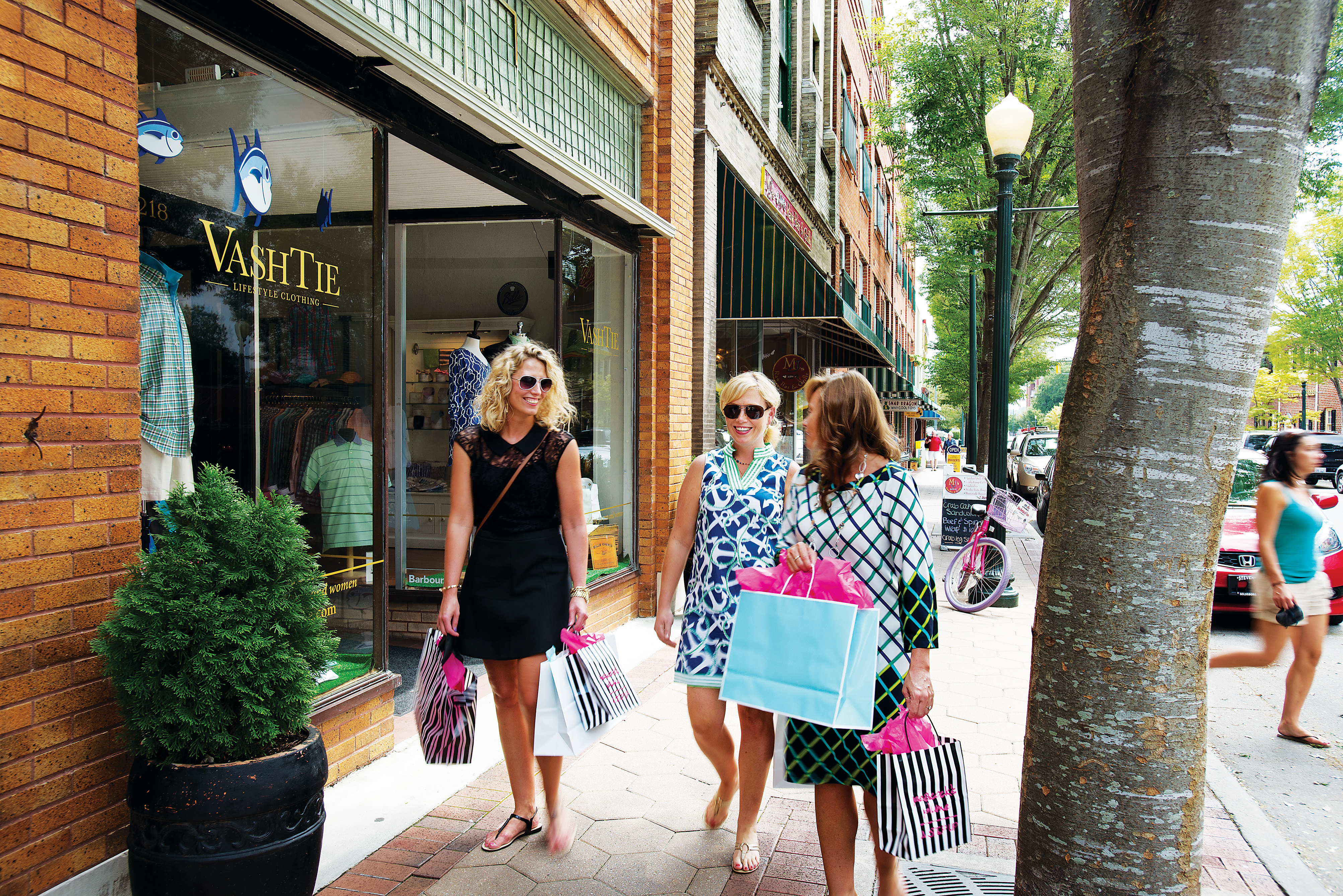 In fact, we have created seven walking tours specifically because of this walkability factor. You can discover our historic homes, our breathtaking architecture, New Bern’s footprints with both the Civil and Revolutionary Wars as well as a Nicholas Sparks-inspired adventure. The truth is, if you aren’t walking the downtown area, you’re missing out. You’re skipping over the faces, the personalities, the shops, the smells and the overall vibe of New Bern. Throw on those comfy shoes and get going!

New Bern is nestled between two rivers, the Neuse and Trent Rivers. This not only gives us those wonderful views, but it makes us an ideal location for vacation, retirement or a day trip. 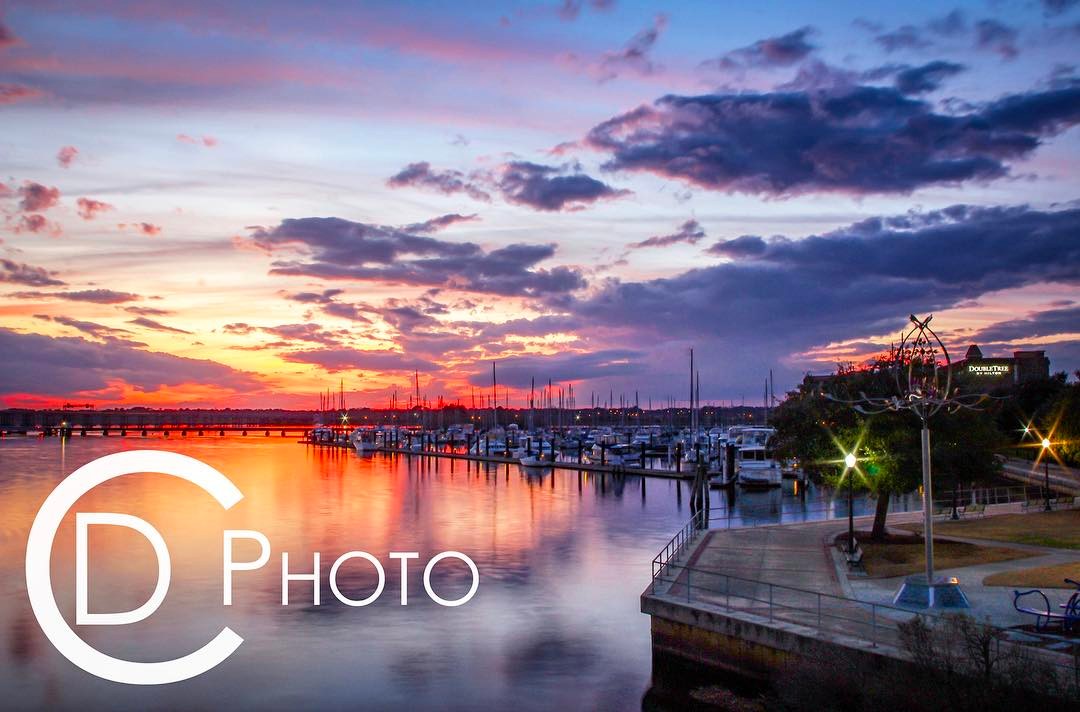 Let’s talk about the convenience of having our very own airport. It may only have two gates, but EWN can take you anywhere. It is such a breeze going through and hopping on the plane to either hub American or Delta offer. Instead of traveling to a major airport, fly New Bern and save yourself some time. We are 90 minutes from Wilmington, two hours from Raleigh and an hour from the ocean. You can travel to these faster paced towns whenever you need to, and then come back to a place that feels like home.

We highlight our art community every month during ArtWalk and ARTcrawl (second Friday of every month), as well as keep our galleries fresh and innovative. The History Center keeps exhibits for about six weeks, and they’re free. We value our art and the passion of our artists here in town. One of the most unique sites downtown is the Bank of the Arts. It was transformed into a gallery that holds events, even weddings. Can you imagine your wedding in such a location? Or Fine Art at Baxter’s? Have you met Donna? She’s a brilliant artist and her love for the gallery is inspiring. The same with Lisa Lentz, who owns the Greater Good Gallery on Craven Street. All of these galleries, events and people add up to a community that spreads nothing but the love for creativity. 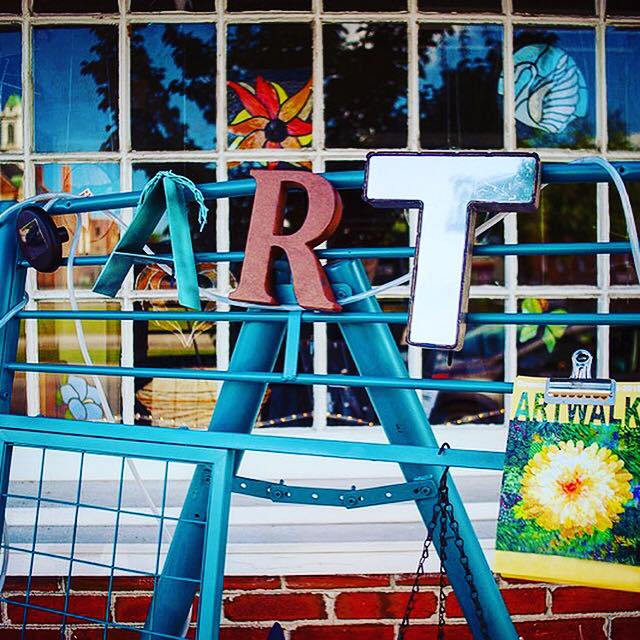 Did you sob after watching The Notebook? I know I did, and it wasn’t pretty. Those heartfelt novels that Nicholas Sparks pens uses New Bern as its landscape in not one, not two, but three of his books. Parts of The Notebook were even filmed here. He mentions Tryon Palace, Cedar Grove Cemetery, the Masonic Theater and so many others, fifteen in fact. These landmarks are all described in three novels, A Bend in the Road, The Wedding and of course, The Notebook. 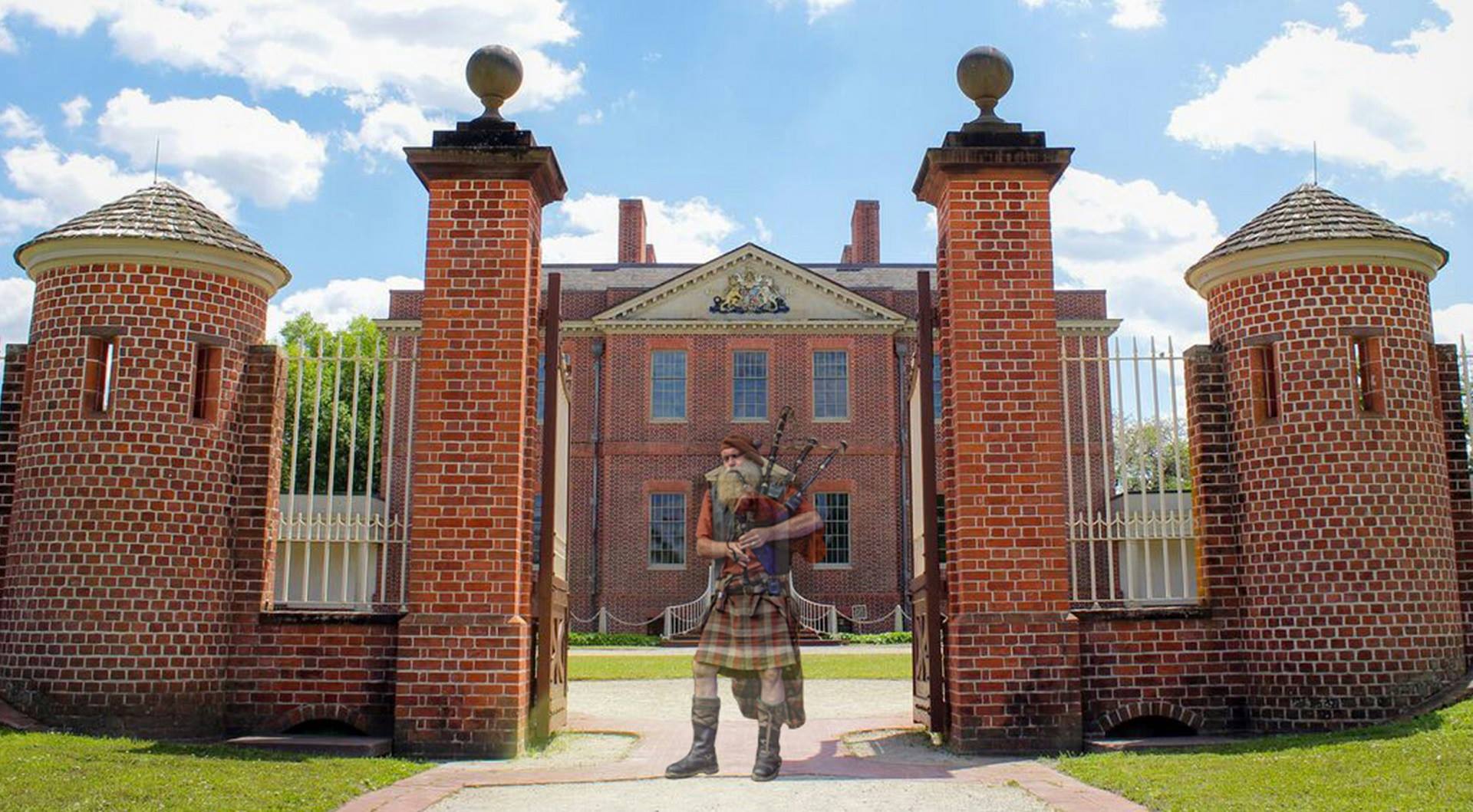 Nick writes from the heart, and he not only talks about this city, he lives here too. There have been multiple times I have been dining at The Chelsea or Morgan’s and ran into him. He splits his time between here and the Wilmington area. It’s obvious North Carolina has his heart. Oh, and what about the Outlander Series written by Diana Gabaldon? It’s such a big deal that Tryon Palace is hosting an Outlander weekend in November. I can’t say that I have seen or read any of it, but it seems to have quite the following. And New Bern is the backdrop. So I should probably get on that.

New Bern is growing, there is no doubt about it. Our population is rising, our storefronts are filled, new buildings are arising, and it’s exciting. The most exciting part of it is how we are keeping our small town charm. Nothing will ever take that away from us as we get bigger. 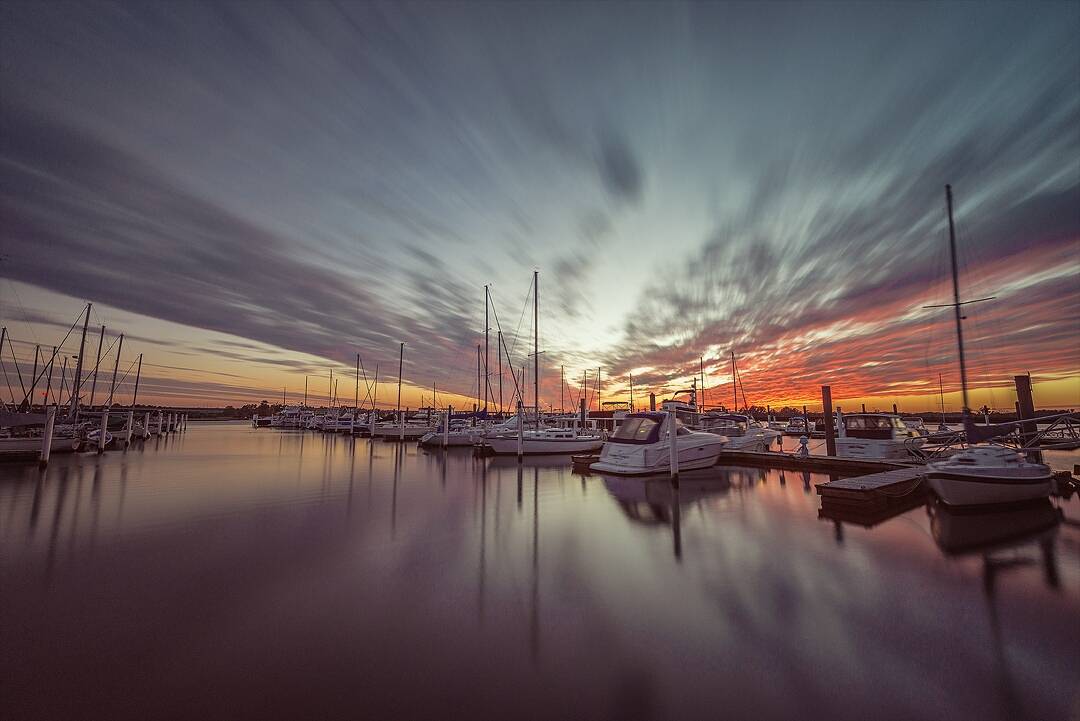 I think this is what New Bern does best. We can expand, but we expand locally to keep the feeling. And by locally, I mean that we don’t have the corporate people coming in and taking over. Sure, we are getting an Ulta (I can’t help but be excited for that), but the majority of those businesses coming in are self-owned, self-made and proud. It’s refreshing to live in a town with such local pride. And we all support each other. There is no competition, it’s a family.

Who wouldn’t be obsessed with a town that lives like this? Plan your trip to see for yourself, but be careful you might become obsessed too! 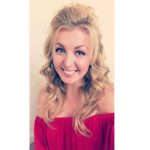 Meet Taylor Shannon.
Taylor is the Visitor and Sales Assistant for VisitNewBern.com where she gets to combine her love for New Bern, Social Media and people. A self-proclaimed lover of social media, she does all she can to make Craven County look as great as it is,  whether it’s on Facebook, Twitter or Instagram. Following a strict budget, she’s your girl when it comes to budget-friendly fun in Bear City. When she is not working, you can find her cheering on the Cleveland Indians or missing her two nieces, Lorelei and Llewellyn.