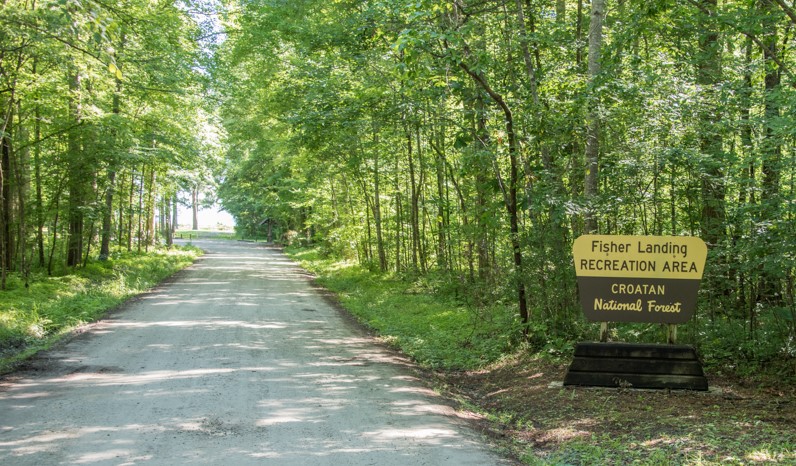 Croatan National Forest is a mere 2½ drive from Raleigh and five hours from Charlotte, but it is the only true coastal national forest in the Eastern United States.  It is close to the North Carolina cities of New Bern, Havelock and Morehead City and surrounds Marine Corps Air Station Cherry Point.
The forest was named Croatan after the Indian tribe living in the region at the time of the storied Lost Colony (1587). Coming in at 160,000 acres, Croatan National Forest is a true outdoor adventure, with pine forests, saltwater estuaries, bogs, and raised swamps called pocosins all teeming with wildlife. It is bordered on three sides by salty or brackish waters — the Bogue Sound and two tidal rivers, the Neuse and the White Oak. The forest is suitable for hiking, camping, hunting, trail biking, and all-terrain vehicles. The surrounding rivers, inland lakes, and creeks are good for swimming, fishing, boating, and canoeing.
Here are seven things to know about Croatan National Forest. 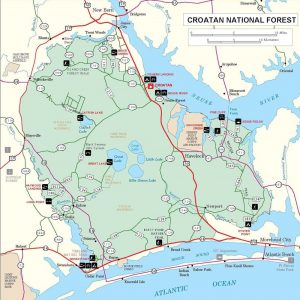 Many hiking trails can be found throughout the Croatan Forest, but the most well-known is the Neusiok Trail. The Neusiok Trail winds 21 miles from a sandy beach on the Neuse River to a salt marsh on the Newport River. In between, the trail crosses cypress swamps, hardwood ridges, longleaf pine savannah and pocosin.  The trail has been used for centuries, by Native Americans and early European settlers, woodsmen and, during the Prohibition years, moonshiners. It is part of the 900-mile Mountains-to-Sea Trail that begins in Great Smoky Mountains National Park and ends in Jockey Ridge State Park at the ocean.
Other trails include the Cedar Point Tideland Trail which traverses a salt marsh and along the White Oak River. The Island Creek Forest Walk features a forest of hardwoods. The Black Swamp OHV Trail offers eight miles for off-road vehicles and bikes. The 13-mile-long Catfish Lake Road provides access to many roads and trails worth exploring. There is also the 14.1 mile Weetock trail.

Wildlife that can be found include black bear, raccoon, squirrel, bobcat, river otter, muskrat, mink, a wide variety of reptiles and amphibians including alligators, as well as osprey, peregrine falcon, various species of owls, quail, bald eagle, wild turkey, and red-cockaded woodpecker.  There are a few sandy areas within the forest that provide pristine habitat for the eastern diamondback rattlesnakes. During the summer months, you’re going to want to bring bug spray; mosquitoes and biting flies can be annoying.

The forest is abundant with pine trees including virgin longleaf pine stands. There are many hardwood areas including the cypress trees of the swamps. Carnivorous plants such as Venus flytraps, sundew, and pitcher plants may also be found. Croatan is also the site of many nearly-impenetrable pocosin pine savannas, old growth beech and oak forests, saltwater estuaries, and bogs. Pocosins, shrubby bogs common to the Carolina coast, are abundant in Croatan.

The tannic-stained blackwater present throughout the forest also gives habitat to several unique species of fish who thrive in the forest’s unique riverine conditions. It is habitate for species such as bluespotted sunfish, mud sunfish, banded sunfish, eastern mudminnow, flier, warmouth, redfin pickerel, bowfin and yellow bullhead, among many others. The elusive swampfish, a species of cavefish, can also be found in several creeks and canals throughout the forest. 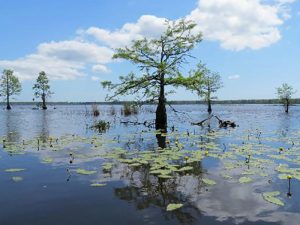 There are four officially designated wilderness areas lying within Croatan National Forest that are part of the National Wilderness Preservation System:

Pitch your tent at one of the several designated campgrounds at Croatan National Forest:

If you’d rather bring your RV, many campgrounds provide hookups for your recreational vehicle. For a more rustic experience, Croatan National Forest allows dispersed camping as well.