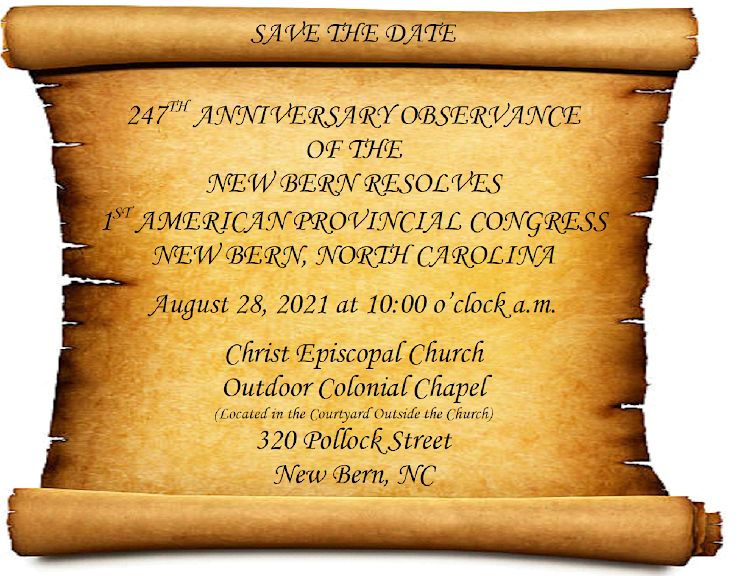 At 10:00 A.M., Saturday, August 28, 2021, the New Bern Chapter of the Sons of the American Revolution will host a ceremony commemorating the 247th Anniversary of the 1st North Carolina Provincial Congress, which was held in the Craven County Court House, New Bern, NC during 25-27 August 1774. This commemoration will include:

The commemoration will begin with a fifteen (15) minute procession from the Centenary United Methodist Church parking lot (crossing Broad Street) to the outdoor Colonial Chapel of Christ Episcopal Church. This procession will be led by the Continental Line and Fife & Drum Corps of the North Carolina History Center at Tryon Palace and include members of the Sons of the American Revolution, Daughters of the American Revolution, St. Johns Masonic Lodge #3, Scouts BSA, as well as numerous local schools and other patriotic and civic organizations.
Following the procession, a one-hour ceremony will be held at the Colonial Chapel and will include a keynote address by Dr. Joseph Beatty, Research Supervisor, Historical Research and Publication Office, NC Office of Archives and History. The ceremony will conclude with a rendering of honors for the 71 Delegates and Resolves of the 1st North Carolina Provincial Congress.
In the event of inclement weather, the procession will be canceled, and the ceremony will be moved inside the Harrison Center, which is located across the street at: 311 Middle Street, New Bern NC.

A luncheon catered by Moore’s Olde Tyme Barbeque is being offered following the ceremony at the cost of $13.00 per plate. RSVP is required to attend the luncheon and can be submitted at: https://forms.gle/VQpVgbdPhu2fBXCF8

New Bern Chapter of the Sons of the American Revolution
Website:
https://www.facebook.com/NewBernSAR