At the Gallery: Ray Charles 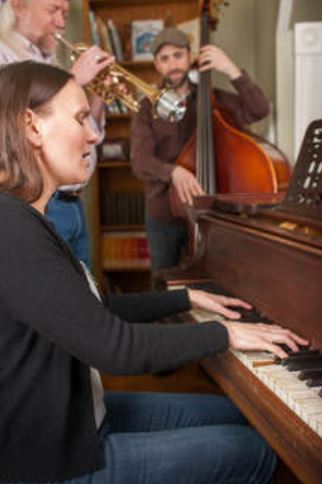 A pioneer of soul, Ray Charles combined blues, gospel, R&B, rock, country music and jazz to create a new genre of American music. Referred to as “Brother Ray” and “the Genius,” Charles had shown an early interest in mechanical object before starting to lose his sight at the age 4 and going completely blind by the age of seven. As a result he was enrolled in the Florida School for the Deaf and Blind, where he learned to read music by braille, and styles of classical, country, folk, and jazz. After graduation Charles initially meet with much hardship in finding work, until his recording contract was bought by Atlantic Recording, for whom he would record a number of hits in a variety of genres. Hits include “Georgia”, “Baby Let me Hold Your Hand”, “I Can Make it Through the Days”, and “Unchain My Heart.”

The Heather Pierson Trio burst onto the national folk scene in 2015 with their debut EP, “Still She Will Fly.”  It features the multi‐genre songwriting, instrumental arrangements and stirring three-part vocal harmonies.  The title track was the #2 single on Folk radio in 2015.

Heather Pierson (lead vocals, piano) is an award-winning singer/songwriter and performer.  With eight previous solo recordings, Heather’s wise-beyond-her-years songwriting, angelic voice and world-class chops have catapulted her into the spotlight.  Davy Sturtevant (cornet, dobro, fiddle, mandolin, harmony vocals) is a veteran touring artist, songwriter, and performer.  Armed with a gorgeous tenor voice, Davy is at once a witty, thoughtful and engaging musical presence. Shawn Nadeau (bass, harmony vocals) brings a rock solid thump and nearly two decades of performing experience to the trio, informed by a wide spectrum of unique rhythmic and melodic sensibilities ranging from rockabilly to reggae to jazz.