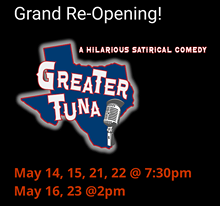 Greater Tuna is a satirical comedy about a small town in Texas named Tuna, Texas’ third smallest town. The wacky inhabitants of this town — men, women, children and animals — are all played by two skillful, transformative actors who must change parts at a rather breakneck speed and use inventive voicework.

The day in Tuna, the third smallest town in Texas, begins—as usual—with Thurston Wheelis and Arles Struvie at the microphones of Radio OKKK, broadcasting at a big 275 watts (at least when they remember to turn the transmitter on). As the day wear on, Tuna’s citizens parade across the stage in all their outrageous and irreverent glory, commenting on life, politics, and what makes them (and sometimes us) tick. All these characters are played by two actors creating the entire population of Tuna in a “tour-de-farce” of quick-change artistry, changing costumes and characterizations faster than a jack rabbit runs from a coyote. Two actors, twenty characters, and a barrel of laughs, y’all.

Beer and wine will be available for purchase.