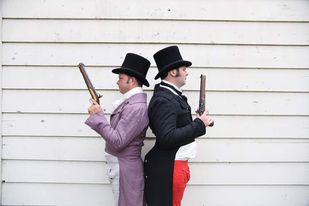 Join Tryon Palace at the annual reenactment of the Stanly-Spaight Duel, an interpretation of an infamous moment in New Bern’s early history at 4 p.m. on Saturday, September 4th, at the New Bern Academy.
On September 5th, 1802, a prominent New Bern lawyer met his political rival, a former State Governor, in a lethal duel on the streets of New Bern. Step back in time to an era where a man’s personal honor was his most cherished quality and any incursion on this prized value could result in fiery and violent retribution. Watch the drama unfold before your eyes in a gripping reenactment of this fateful day.
While at the New Bern Academy, visit the New Bern Academy Museum which features local history, architecture, and an exhibit on New Bern’s Civil War history. The New Bern Academy Museum is open free to the public from 10 a.m. to 5 p.m. that day, and 12 p.m. to 4 p.m. every Friday, Saturday, and Sunday.
This reenactment will include black powder firings and feature replicas of period weapons, which are loud and sudden.
+ Google Calendar+ iCal Export