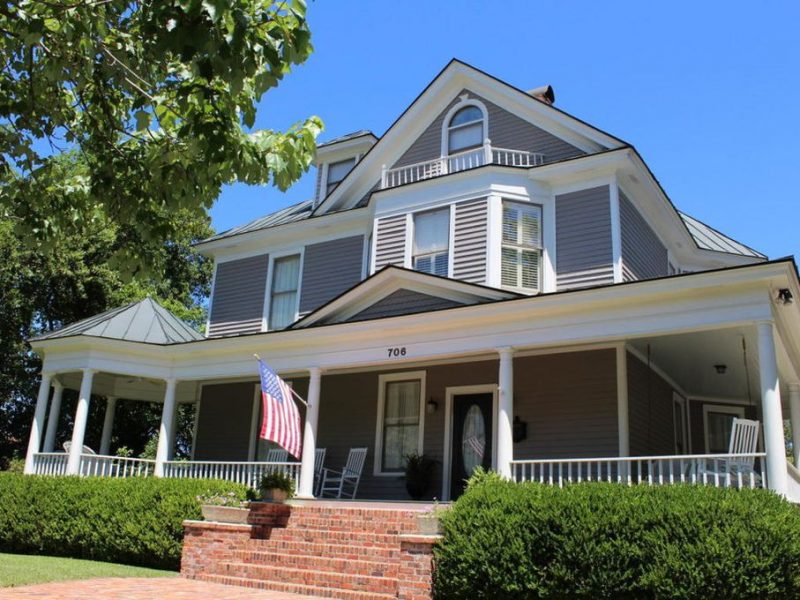 New Bern’s history is a story of remarkable strength and resilience.

It has survived the test of time since it was founded in 1710, but what stands out these days is Hurricane Florence, which scoured and flooded the city in September 2018. Much of the downtown and the city’s historic neighborhoods were flooded during the hurricane, and work continues to restore many of those homes to their previous grandeur.

On April 12 and 13, the New Bern Historical Society celebrates New Bern’s extraordinary heritage and beauty with an exciting new homes tour featuring some of the finest properties in five historic neighborhoods: Downtown, Dryborough, Riverside, DeGraffenried Park, and Ghent.  Visitors will be invited to tour 18 historic properties over the two days: 15 homes, including two with renovations in progress, one public building, and three gardens.

Executive Director Mickey Miller is excited about showcasing the character and diversity of New Bern’s past.  “New Bern’s charm is not contained to just the downtown. We are a ‘community of communities”; each of our historic neighborhoods has a unique character, a different story, and a distinct sense of place.  While many folks are still rebuilding and repairing after Florence, New Bern needs this event to celebrate our remarkable ability to move forward.”

Guests are invited to take a break during the tour at the Garden Party Pavilion behind the Attmore-Oliver House.  There you’ll enjoy refreshments, live music and visit with historic characters — all included in the price of your ticket.  Music will be provided by Simon Spalding, the DownEast Dulcimers, Tommy Duzan Sr., and Jim and Kathy Kohler.

Master gardeners will present a special heritage garden demonstration, and food trucks along the route will offer lunches to help guest maximize their tour schedules.

Tickets are available starting March 1 at New Bern Historical Society office at 511 Broad St., phone 252-638-8558 and online at www.newbernhistorical.org/tickets.  In mid-March, tickets will be carried by Mitchell Hardware on Craven Street and the Bank of the Arts on Middle Street.  Harris Teeter locations on Dr. Martin Luther King Jr. Blvd and in Carolina Colours will carry tickets beginning March 21.  Tickets are $20 in advance and $25 the day of the tour, and $16 for active duty military and those in groups of 10 or larger.

The New Bern Historical Society celebrates and promotes New Bern and its heritage through events and education. Offices are located in the historic Attmore-Oliver House at 511 Broad Street in New Bern.  For more information, call 252-638-8558 or go www.NewBernHistorical.org or www.facebook.com/NewBernHistoricalSociety.

Here is a sampling of houses included in this year’s tour:

David S. Congdon House, 706 Craven Street.  Owners Bill & Cheryl Jukich.  Never before seen on tour, this circa 1908 house is a hybrid of Queen Anne and Colonial Revival styles.  The house was carefully restored and renovated after being used both as apartments and as a hospital in the early 20th century.

John M. Aberly, Jr. House, 1502 Tryon Road. Owners Michael and Marty Gunhus.  This circa 1940 Colonial Revival home was built by and for Aberly, a lumber company owner and builder, who was credited with building some of the finer homes in DeGraffenried Park.

Turnbull House, 1316 National Avenue, Riverside.  Owners Jeff and Caitlin Wood-Yesline.  This fine example of Colonial Revival style, circa 1925, sports one of the few pools in the historic districts.  Designed by Herbert Woodley Simpson, New Bern’s prolific native son-architect, who designed nearly all of New Bern’s major residences, churches, and public buildings built between the early 1890s and the 1920s.