New Bern is the second oldest city in North Carolina, so it is no surprise that much of its history stands out.
Among them is the rich history of the New Bern Fire Department, the oldest in the state.
The New Bern Fire Department is a unique organization, starting with the Atlantic Hook & Ladder Company, which was organized as a fraternal organization on May 14, 1845.
The fire company became inactive during the Civil War because many members were away serving in the Confederate Army.
Throughout most of the war, New Bern was occupied by Union forces. Union Army soldiers established the New Bern Steam Fire Engine Company No. 1 — the Button Company — as a fraternal organization on January 1, 1865.
Upon their return from the war, members of the Atlantic Hook & Ladder Company reconstituted their fire company — the Atlantic Company — thus beginning a fierce rivalry that lasted for decades.
The rivalry escalated when Union troops imported a hand pump from the North. This device reached its maximum output when eight men exerted their weight on each end of the pump’s cross-beam lever.
A 16-man crew pulled the vehicle to the scene of the blaze. The pump drew water from strategically located wells at Middle and Pollock Streets, Broad and Middle Streets, South Front Street, Bern Street (in Five Points), and North Craven Street at Pelletier’s Knitting Mill. If the fire was near the Neuse or Trent rivers, water was pumped from them. 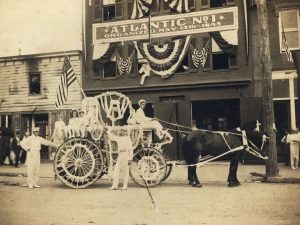 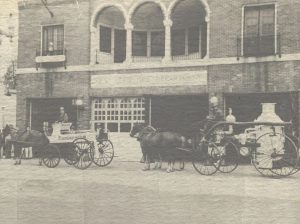 After pulling and pumping this Yankee apparatus for about three years, the New Bern Steam Fire Engine Company No. 1 persuaded the Town Council to purchase an Amoskeag, the city’s first steam fire engine, which was delivered in 1868.
The rivalry between the Atlantics and the Buttons gained momentum. They competed at firefighting competitions throughout the state. During competitions, the two companies set many world records. To this day, the Button Company holds the world record for running quick steam in 1 minute 46 seconds. The Atlantic Company won the state championship for reel racing several times.
Although the Atlantics and the Buttons were the leading fire companies in the city, they were not the only firefighting organizations.
There were several others, both white and black, as well as a junior fire company. The junior fire company was made up of young men between the ages of 16 and 18, and was called the “Excelsior Bucket and Axe Company.” Upon coming of age, these junior firefighters were absorbed by the Atlantic and Button companies.
Other fire companies that came about were: the Mechanics, the Fourth Ward, the Riverdale, the Holden Company (named for Governor Holden), the Axe, the Rough and Ready Fire Company, and the Independent Colored Fire Company.
The New Bern Fire Department kept up with the city’s growth.
With the arrival of the steam fire engines, the driver’s seat was equipped with leather straps to keep him from being thrown off when an engine struck a hole in the oyster-shell-pave street. The streets were later paved with bricks once a water system was installed just prior to 1900. 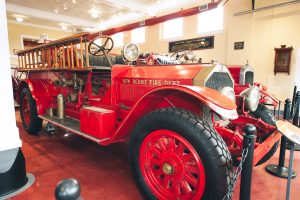 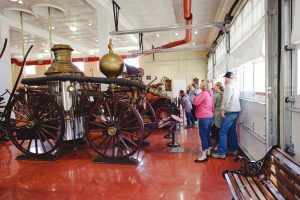 As a result of these improvements, the fire departments were in a better position to fight several destructive fires that came a few years later.
In the early 1900s, residents of New Bern would gather to see which company would arrive first.
In 1914, each company received an American LaFrance motorized truck; the Atlantic Company truck was white and the Button companies was red.
All of New Bern’s fire companies were severely tested in 1922, when a fire burned much of the city and left almost 2,000 people homeless.
The rivalry continued until 1928 when the Town Council decided to house both companies in a central fire station, located on Broad Street in downtown New Bern. The building is symmetrical in almost every way so that the two companies could work together equally.
The exception is that each company had its own slide pole and held its own meetings. A second-floor balcony allowed chiefs of the respective companies to meet in the middle.
In 2001, the city appointed a full-time fire chief. Prior to this, the position of chief rotated between the Atlantic and Button companies each year.
The Button and Atlantic Companies are now called New Bern Volunteer Fire Department. The Volunteer Chief is appointed by the Fire Chief and has the title of deputy chief of volunteers.
The old central fire station now houses New Bern Firemen’s Museum, which features an extensive collection of original fire equipment. 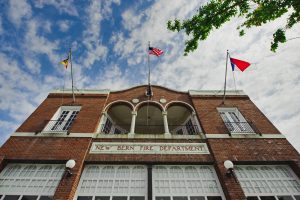 New Bern Firemen’s Museum
Museum dating back to 1955 telling of the oldest fire company in the state and the Great Fire of 1922.